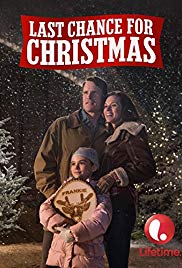 You want a film that works on matriachy? Cos I have an unexpected Christmas treat for ya here: Mrs Claus calls the shots. Here you go!

For all the film’s dull bits (and there is a fair share) a massive shout out to Christie Claus (Jayne Eastwood) who is a grump and a delight who calls her employees “toots”. So refreshing to see a Business Bitch who doesn’t die or become an event planner!

Christine’s are the more fabulous scenes in Last Chance for Christmas (a title I’ve been singing to the tunes of Step Into Christmas  for weeks), but there are also several sequences where the same three characters display the same three emotions, so…

Nick is Santa’s blandly attractive and perfectly forgettable stable manager, that is to say I’m not 100% sure that Nick is his name. He’s the only one in the North Pole not dressed ridiculously extra, why do we have to follow Joe Bloggs?

Rob or whoever is on a mission to find a new reindeer after Prancer does his hoof in, but reindeer farm owner and single mum Annie isn’t budging. She won’t sell her reindeer despite the farm rapidly losing business- possibly because it’s also not open to the public. Has she tried… anything?

Annie’s smol daughter Maddie adores the fingered-for-replacement-Prancer reindeer Frankie, meaning drama and KOoKy mIsuNDErsSTaNdUnGS ensue when John Smith turns up to “borrow” him. I mean, it doesn’t help that the bad guy, a banker who probably has a portrait of Mr Potter over his bed, also wants to steal the reindeer- even though he’s struck down with a case of “looking wistfully into the middle distance” whenever he sees a sledge. The cause? He once owned a sledge as a young boy!

The film is reliably predictable, and frequently repetitive. I mean, of course Queen Christine and Santa are going to save the day- they can’t break a little girl’s heart! Least of all because Maddie’s not one to conjure any strong emotion.

I do love how the romance develops between Annie and… I dunno, Ryan? They sit down to discuss business plans, and the soundtrack swells as Annie’s face softens into this big soppy smile. That’s right: she falls in love with his business acumen.

It harks back to Austen’s Pride and Prejudice when men didn’t need acumen, just big houses and wet shirts

I’ve been crapping solidly on the bland lead but for what it’s worth, Hilarie Burton is doing her darnedest to hide the fact she’s phoning the performance in (you only need to watch the superior Naughty or Nice to know she is after a quick paycheck here). I’m in it for those ludicrous North Pole outfits, the villain’s morality constantly teetering on redemption before he goes “nah, fuck it, let’s steal reindeer”, and Santa saying “it’s me, from soup to nuts.”

Deep down though? I know Queen Christine deserves better.